Putting children first when you separate. 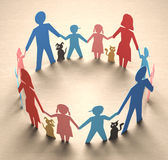 Conflict can have  serious long-term effects on children. Studies have shown that it’s not the separation or divorce proper that has an impact, but rather the conflict arising from it that negatively affects their well-being.

And how does divorce and separation affect young people? (2014 ComRes survey)

Mediation can be a way of minimising the conflict which can have such serious consequences for children. If mediation isn’t an option then a solicitor who has signed up to the Resolution code of conduct will help you ensure that conflict is kept to a minimum and that your children’s interests are put first.

Rebecca Kershaw is an accredited mediator and a member of Resolution. Get in touch with her by email rebeccak@ksandc.co.uk or phone 01405 813108.